Surprise at the Chicago Cultural Center

- December 22, 2018
The Chicago Cultural Center was completed in 1897 as Chicago's first central library.  It became a cultural center in 1991.  The landmark building is home to two fantastic stained-glass domes, art exhibits, performances, films, and more.  The Tiffany stained-glass dome is more well known.  When I went to visit, I asked to find the Tiffany dome but I was told by a lady that the dome on the 2nd floor was worth looking at even though it was less known.  I decided to check it out and to my surprise it was a dome room and ballroom dedicated to the Union Soldiers of the Civil War.  I was silent when I realized this because I am researching this time period extensively and had no idea what I was going to find upon my visit.  If I had not asked for directions to the 3rd floor dome of this particular lady, I would never have visited the 2nd floor dome to take in its full beauty and meaning.  I was silenced as this is just one of the many synchronicities I am experiencing right now in my life.  This place is worth the visit.

"The Grand Army of the Republic (GAR) was a fraternal organization composed of veterans of the Union Army (United States Army), Union Navy (U.S. Navy), Marines and the U.S. Revenue Cutter Service who served in the American Civil War. Founded in 1866 in Decatur, Illinois, and growing to include hundreds of posts (local community units) across the nation (predominately in the North, but also a few in the South and West), it was dissolved in 1956 at the death of its last member, Albert Woolson (1850–1956) of Duluth, Minnesota. Linking men through their experience of the war, the G.A.R. became among the first organized advocacy groups in American politics, supporting voting rights for black veterans, promoting patriotic education, helping to make Memorial Day a national holiday, lobbying the United States Congress to establish regular veterans' pensions, and supporting Republican political candidates. Its peak membership, at more than 490,000, was in 1890, a high point of various Civil War commemorative and monument dedication ceremonies. It was succeeded by the Sons of Union Veterans of the Civil War (SUVCW), composed of male descendants of Union Army and Union Navy veterans." - Wikipedia 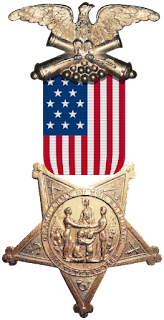 The Grand Army of the Republic badge. Authorized by the U.S. Congress to be worn on the uniform by Union Army veterans.  CC BY-SA 3.0 by Parsa 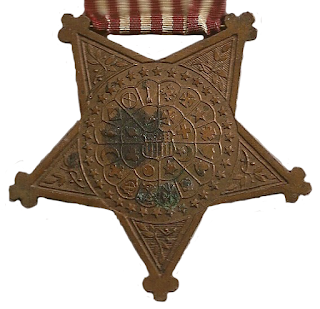 Reverse of the Grand Army of the Republic Badge. 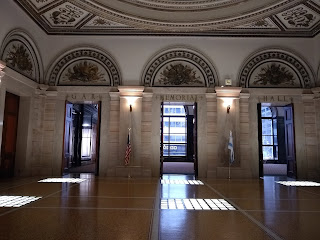 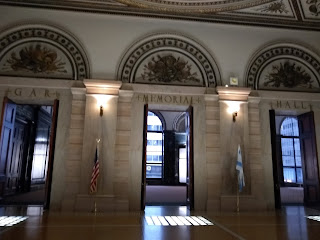 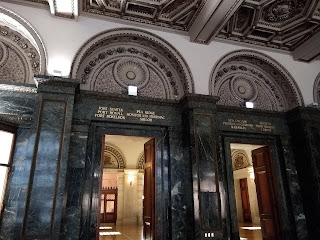 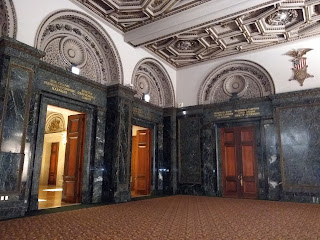 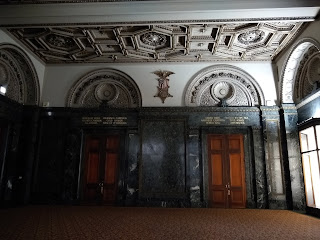 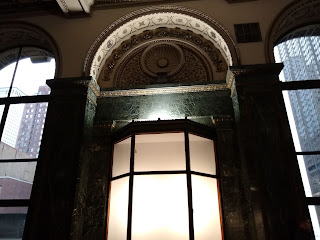 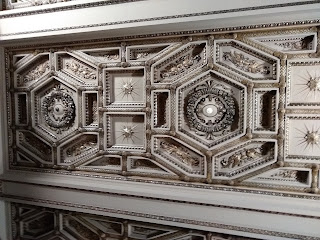 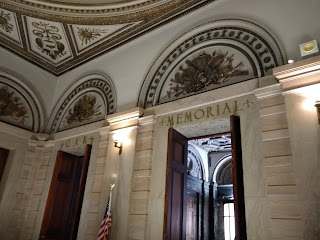 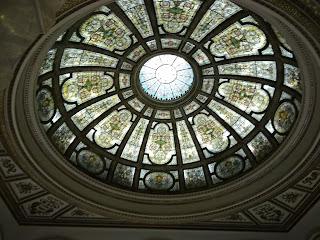