A Race of Giants Lived in Lake County, IL

- December 22, 2018
A race of giants were found in the mounds when the early pioneers came to Lake County. Many were over 7 feet tall. They didn't leave much in the matter of records and their skeletons were falling apart. Who were they? We won't ever know until the Smithsonian is put in check and we are allowed to fully examine their DNA without interference. That day will be coming.  Here is the page from the book with the testimony.

"Of the very early history of the region which now embraces Lake County but little can be written. The Mound Builders had occupied it and passed away, leaving no written language and but little even as tradition. They had erected their piles of earth, usually from the surface soil, and underneath them had deposited the remains of their dead, together with bits of pottery and a few rude implements of husbandry and warfare. The mounds were quite numerous along the rivers and in the vicinity of the inland lakes. That they were of great antiquity is evident from the fact that huge forest trees had come to maturity upon their summits and were awaiting the ax of the pioneer. Excavations of these piles of earth have revealed the crumbling bones of a mighty race. Samuel Miller, who has resided in the county since 1835, is authority for the statement that one skeleton which he assisted in unearthing was a trifle more than eight feet in length, the skull being correspondingly large, while many other skeletons measured at least seven feet. There were extensive burial ground on the shore of Lake Michigan, mainly south of the stream known as Waukegan River; also at various point all through the county." 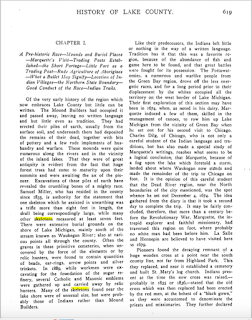