Without giving too much away, I'll tell you a little bit about my visit to Zak Bagans' Haunted Museum.  The museum is said to have 30 rooms.  The tour (which includes a tour guide) is about 1 hour and 15 minutes.  The haunted basement where occult rituals have taken place is off limits.  The rooms are very small.  I went at night for one of the last tours.  The tour included about six people and a tour guide.  Most of the tour guides were wearing crosses for protection.  I suppose I fit right in with my purse and its Celtic cross. 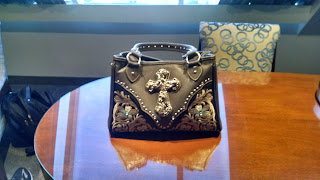 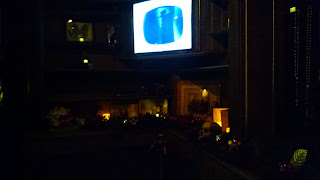 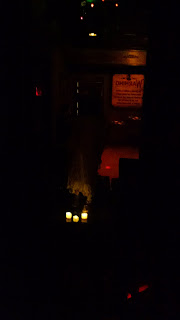 The lobby had the "old building smell" with some sort of herbal aroma that smelled like possibly evergreen or similar aroma.  If you go on this tour, I will warn you to be prepared for surprises and that is all I will say.

The tour began by taking us to the entrance of the home and throughout the house to each room that had its own theme and collection.  The most notable was the room that contained the Bella Lugosi mirror (as seen on Ghost Adventure's show at the Museum).  The mirror was draped with a black cloth.  We were brought in the room and given the history of the items.  I swear I saw black eyes on one of the paintings near the mirror and some sort of black shadow around the face of the woman in the painting that was next to the mirror.  I don't know if it was an optical illusion or not.  We were offered to look behind the cloth and into the mirror.  I chose not to and so did a couple of others, but the rest of the tour lined up to do so.

After moving on to a couple more rooms, I did see very black hands briefly on the wall of the room.  I am not sure if they were a shadow of the hands of the tour guide or not.  The hands were very dark and were briefly ( about 2 seconds) on the wall.

I experienced cold spots on my right leg and side during most of the tour until we got to the upstairs where the Dybukk Box and haunted doll were.  I chose to not look at either again as we were given a choice.  I waited out in the hall by the stairs and experienced over-heating and what may have been fog from a fog machine.

Perhaps you could explain most of these strange things to "psychological" suggestion and air blowing (all though I was told the air conditioner was off and they were not blowing anything through the museum).  After about one hour of the tour, I asked to leave early, as I was not feeling good and was very tired, after standing outside the rooms with the Dybukk box and haunted doll.  I was able to leave with security.

I purchased sage at the gift shop and cleansed myself and the person I was with before we left.  Once was enough for me.  I will not give all the details away of the tour, but I will say that the final thought in my mind was that overall I experienced the energy of Zak Bagans and not anything in particular in that museum.  His energy and mindset was the strongest energy of all.  Perhaps his museum is haunted, perhaps Zak Bagans is a very good Showman, or perhaps a bit of both.  If you visit, take care.